Home › Media discourse and media bias › Is the media biased? Can the study of language tell us? (Part 3)

Is the media biased? Can the study of language tell us? (Part 3)

Posted on February 3, 2013 by Nic Subtirelu — Leave a comment

I’ve been looking at media outlets’ coverage of the recent fiscal cliff negotiations, examining how different news outlets differed in the choices they made in reporting the events and how these different choices in discourse might reveal their biases (to read more about choices and biases in discourse, check out my first post).  In my last post, I looked at how the word “income” was used more frequently in the MSNBC coverage of the fiscal cliff than it appeared in news articles on politics in general from the same time period (in other words, it was a key word).  In comparison to MSNBC, CNN and Fox News used the word less frequently.  When I examined the uses of the word “income” more closely, I found substantive differences in the way the three networks used the word (read about them here). 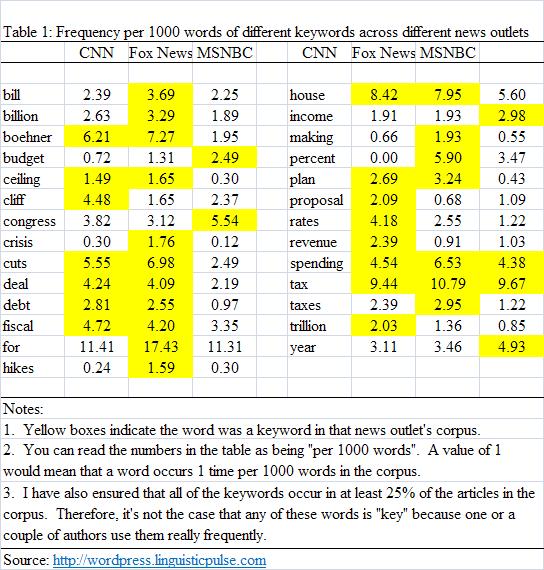 Building on this, I’m going to look at words that reflect how tax policies were represented in Fox News and CNN.  Looking back over Table 1 from my last post (above) I find that the word “hikes” is key in the Fox News corpus and only the Fox News corpus, whereas “revenue” is key in the CNN corpus and only the CNN corpus.  Intuitively, this suggests a difference in the choices these news outlets made in writing about taxes.  We can be more specific about what this looks like by looking more closely at the data.

We could say that this is a choice made to seem more colloquial or informal.  “Hikes” seems slightly less formal or technical than a word like “increases”.

However, I think what is more relevant here is the negative connotation that “hikes” carries with it.  This may seem difficult to demonstrate outside of saying that the word “feels” negative.  Indeed, most dictionaries are probably not much help.  Merriam-Webster includes a definition of “hike” as “an increase especially in quantity or amount”, which contains no hint of anything bad.  Indeed, we could imagine increases in the amount of free pizza being called a “hike” with that definition.  However, I believe that “free pizza hikes” are unlikely based upon the way the word is used or its connotation. We can demonstrate this by looking at a random sample of 50 uses of the word “hikes” (or “hike” used in the sense of  “an increase”) which I took from the Corpus of Contemporary American English (COCA), a very large corpus freely available on the internet.  I present part of this sample in the screenshot below.

Interestingly, most of what we see used with “hikes” are not apparently good things (like free pizza or profits) but rather things we would generally consider bad like increases in taxes, premiums, costs and prices of goods we commonly buy, etc.  There are a few things that might be considered positive like increases in wages as in the “contemplated hike” in the minimum wage.  However, this increase is presented in conjunction with the problems it would inevitably cause.  To further illustrate this point I also searched COCA for “profit hikes”, “revenue hikes”, and “salary hikes”, which returned 0 cases of the first, 1 of the second, and 6 of the third in a corpus of 450 million words.  Compare this to “price hikes” which occurs 141 times in COCA’s 450 million words.

I’ve presented this to you, because I believe it tells us something about how words pattern with other words and meanings and as a result take on shades of meaning that we might not expect or even be able to find in a dictionary (Check out this blog post, “When Vilified Words Attack”, for a more extensive discussion of this phenomenon).  The patterns we see in “hikes” suggest it is used to express negativity and that we’d therefore be unlikely to see phrases like “free pizza hikes”.  Therefore, Fox News chose the phrase “tax hikes” to convey negativity about increases in taxes that were proposed during the fiscal cliff negotiations.

As I’ve been trying to emphasize in my discussion of media bias, discourse involves choices (see my first post on choices and bias in discourse). In this case, there is another equally valid choice, which CNN writers tended to make.  They used the word “revenue” more than twice as frequently as both of the other two news outlets.  CNN writers used the phrase “tax revenue” 11 times, while Fox News writers used it twice, and MSNBC writers never used this phrase.  “Revenue” like “hikes” is not a neutral description. It emphasizes the money-making aspects of taxation and suggests that the taxers (the government) have a purpose for raising taxes (something that “hikes” is silent about).

These choices of “tax hikes” on the one hand and “tax revenue” on the other were used to describe the exact same phenomena.  Their accuracy in terms of specifying a real world phenomenon isn’t really debatable. Although they both refer to the same thing in this case, they do not present that thing in the same way.  Indeed, Fox News writers chose to portray tax increases negatively, while CNN writers chose to focus on the purposes of tax increases (a more positive picture).  Fox News readers then were exposed to stories about how their taxes would be raised, stories that were often silent about the purpose behind such increases.  Readers of CNN read stories about how the government was in the process of raising revenue through taxes.  Hence, they read stories about a purposeful decision, and those stories were relatively quiet about the financial cost of these decisions on tax-payers.

Combined with the findings I presented in my last post, a clear picture of Fox News’ coverage is beginning to come together (and to a lesser extent the other two media outlets).

Clearly, Fox News writers wish to emphasize the negative impact of taxes on people earning all levels of income.  They are choosing to present the people being taxed as “families” and “earners”, and they are choosing to be relatively more quiet about the purposes for which taxes are being collected.

Another aspect that I think is important in the news coverage is who the news outlets chose to talk about.  What are the keywords that suggest people, and how are these words used by the three news outlets?  Looking at Table 1, it’s clear that “house” (the House of Representatives and the White House), “congress”, and “boehner” all point to people involved in the fiscal cliff negotiations.  In my next post I’ll take a look at these words.

Don’t forget to subscribe to my blog if you’d like to be alerted to my updates.  Also, let me know what your thoughts are about the biases I’ve uncovered so far.  Have you noticed examples like these or perhaps other examples?