In the daily stream of things that aren’t news, packaged and sold to us by, of all people, the news media, one set of particularly non-newsworthy events has emerged from Nelson Mandela’s death and subsequent memorial: stories scrutinizing President Obama’s conduct while in attendance at the memorial. This is of course not new. Obama’s conduct has been frequently scrutinized including his alleged ‘bow’ to the King of Saudi Arabia and the never-ending obsession with his use of ‘the fist bump‘ (i.e., giving dap). 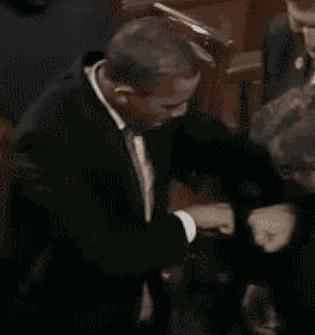 Two instances of Obama’s conduct have been presented to us. First, a number of stories have reported on a handshake exchanged between Raúl Castro (current President of Cuba) and President Obama. Second, and more recently, a series of pictures showing Obama, David Cameron (current UK Prime Minister), and Helle Thorning-Schmidt (current Danish Prime Minister) taking a ‘selfie’ and generally appearing to be enjoying themselves at the memorial have been circulating. I’m going to take a closer look at the handshake in this post. You can see a nice video of the handshake below.

The question I’d like to ask is this: why report on this at all? Of course, the media doesn’t think that handshakes are inherently newsworthy. If they did we’d have to wade through hundreds of news stories about politicians shaking the hands of all kinds of people every single day. Imagine this headline”Congresswoman shakes new neighbor’s hand!”.

Instead, the media reports these things with the hope that we will draw broader interpretations from these micro-actions. That Obama placed his hand in the hand of a man is not news. What is news is what this apparently tells us about the apparent implications this will have for the United States and Cuba. One interpretation is “the historic handshake” signifies “Mandela-like reconciliation“. The writer of this story maps the United States’ and Cuba’s geopolitical relations on to the interactions between these two men:

The two presidents’ civil behavior towards one another was just the latest sign of a change of tone in the usually hostile rhetoric between the two governments.

Another set of stories links the handshake instead to Cuban-Americans’ apparent outrage with the event. Fox News, for example, quotes Senator Marco Rubio as stating “If the president was going to shake his hand, he should have asked him about those basic freedoms Mandela was associated with that are denied in Cuba”. The writer also connects the handshake to geopolitical relationships between the two countries:

It’s unclear whether more will come of the gesture, as efforts by the Obama administration to thaw relations between Cuba and the U.S. have been slow-going.

Here is the problem with this type of reporting: It immediately moves from the face-to-face interactions of human beings and assumes that all interactions between the two men can legitimately be interpreted as iconic of their two countries’ relationship. Of course, these men are representatives of their nations, and their handshakes can be incredibly meaningful, as they may actually be the performance of some type of geopolitical agreement. Take, for example, the handshake below between  King Hussein I of Jordan and Prime Minister Yitzhak Rabin of Israel during peace talks between their two countries. 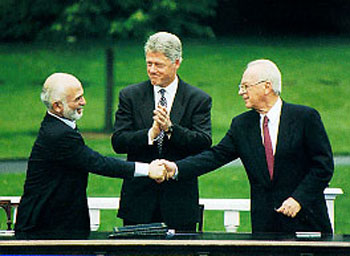 However, there is another level at which handshakes take place and are meaningful all on their own, even for the President of the United States, and this is the level of contact between two human beings. A handshake can simply be a pleasantry between two individuals who are acquaintances and have not seen each other for some time. There is plenty to suggest that Obama’s handshake was intended in this manner and not in the symbolic manner pictured in the photograph above. For example, Obama and Castro are not currently in a context where any type of negotiation is under way. They have not necessarily invited media attention to document the handshake (though of course both probably know that they can never really get away from the media’s documentation of them particularly in public).

So here’s where this takes a particularly interesting turn. Of course, members of the media know that a handshake can be meaningful on the level of human interaction; most of them undoubtedly engage in this kind of behavior constantly. However, members of the media are also savvy enough to know that it’s not the case that human interaction when it involves powerful men is completely divorced from geopolitical events. Indeed, these men’s relationship with each other mediates the relationship between Cuba and the US. A sour relationship between Castro and Obama will negatively impact the chances at improved relations between Cuba and the US. A civil relationship between them could be helpful in improving relations.

Here’s what I think is particularly interesting. The media are constructing our reality in that by choosing to write and talk about the event, they implicitly make the argument that the event is newsworthy, which means it must not be meaningful only at the level of human-to-human relations. Instead, the implicit argument is that this is a geopolitical event, otherwise the news media would not report on it, to do so would be strikingly odd. Hence, even when the media acknowledges the possibility that the handshake is meaningful only at the level of two humans interacting (as they do when they choose to quote Obama’s aide saying that is all it was), they make the implicit argument that it is more than that. In essence, the attention of the media constructs certain events as meaningful on a macro-scale. In other words, by writing and talking about the handshake, the media transforms the handshake into a geopolitical event, whether it was before or not. The media have a stake in the manufacturing of geopolitical events as it provides more fodder for more stories such as the inevitable responses of others like Republican politicians to the media-created event.

This has a number of implications for how we should view the media’s interpretations of events as they clearly have a vested interest in manufacturing stories for our consumption. It also suggests that technological advances in media dissemination have greatly transformed the very act of diplomacy. With the advent of 24 hour news, the internet, and ubiquitous digital recording devices, the micro-interactions of politicians and diplomats are now always open to the interpretation that they constitute geopolitical events. The question we have to ask ourselves then is: Is this a positive move toward transparency or does it hinder the ability of our leaders to negotiate for our interests?

One comment on “News that isn’t news: Extrapolating global political relations from handshakes”