Home › Language and gender › Communication skills for women: Profiting off of the marginalization of women in the workplace

Communication skills for women: Profiting off of the marginalization of women in the workplace

We live in a world where men’s practices and ways of being are largely viewed as ‘the norm’. Women, to the extent, that they are even recognized as having practices and ways of being are seen as needing to fix these things in order to ‘be successful’ in society. Our discourse about communication in the workplace in particular presents men’s practices in a positive light (for example, ‘assertive’ and ‘tough’) and women’s practices mainly in a negative light (for example, ‘overly-emotional’ and ‘weak’). I recently received an excellent exemplar of this type of discourse in my inbox, announcing an intervention to teach women ‘communication skills’ for the workplace.

These great entrepreneurs (Fred Pryor seminars) are suggesting that they have solutions for fixing women’s inability to have themselves “taken seriously” and their problems “dealing with other people’s [presumably men’s] anger”. The shrewd business people are also seeking to help women get “the floor” in conversations.

While many women no doubt have experienced these things, the advertisement presents them as things women allegedly lack (for example, the ability to take the floor and the ability to control their emotions). However, rather than necessarily being things women cannot do, we might consider that in fact women have perfectly functional alternative practices. Indeed, this is exactly what sociolinguists like Deborah Tannen argue. While men’s often competitive speech may be functional for workplaces dominated by men, women’s speech often belies a greater focus on achieving cooperation.

Yet we fail to acknowledge the communication skills women actually have and instead point to their apparent ‘failings’. This discourse seems to be exactly what Nancy Henley and Cheris Kramarae were talking about when they wrote that

Hierarchies determine whose version of the communication situation will prevail; whose speech style will be seen as normal; who will be required to learn the communication style, and interpret the meaning, of the other; whose language style will be seen as deviant, irrational, and inferior; and who will be required to imitate the other’s style in order to fit into the society (Henley and Kramarae, 1991, p. 20)

I think this point is best driven home by a creative alternative reality in which men are expected to learn ‘communication skills’ to ‘be successful’ in a world dominated by the type of communication women might prefer. In such a reality the flyer below is what I would have received in my inbox. 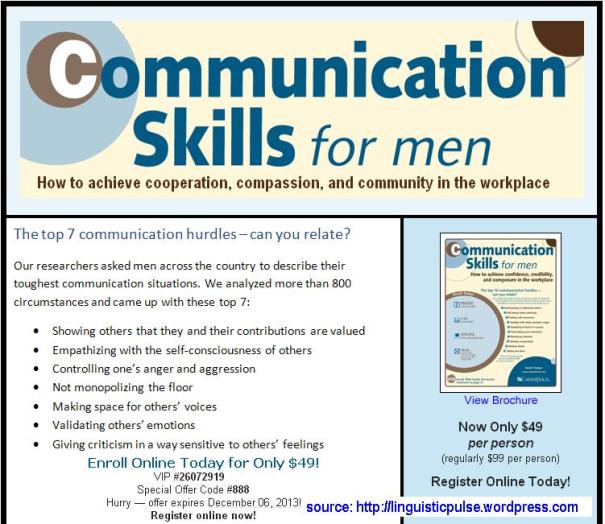 My point here is not that we should start such an alternative industry or that we should create a world in which men are marginalized. The point is that no such programs exist due to men’s verbal behavior being viewed as normal and acceptable and women’s being viewed as inappropriate for the workplace. This, no doubt, would be defended by many as representing the competitive nature of United States capitalism. However, we might also consider whether women’s communicative styles have a very productive place in our workplaces and our society as a whole. A recent example comes from the bipartisan Congressional deal that ended the shutdown of the federal government. The success of this deal was widely credited to the female members of the US Senate and House of Representatives who were able to craft a deal while the men of Congress were stuck in gridlock. This success may have had a lot to do with women’s cooperative communication style. As Senator Susan Collins suggested about women, “we are used to working together in a collaborative way”.

3 comments on “Communication skills for women: Profiting off of the marginalization of women in the workplace”