Last week, a man who most people have probably never heard of died: John Gumperz.  He was, however, a very important discourse analyst and sociolinguist.  His work has had an impact on my own thinking particularly about my approach to intercultural communication.  As a result, I wanted to write a brief post talking about one of the most important everyday lessons that his research holds for us as members of pluralistic societies.

What Gumperz is best remembered for is the idea that in different cultures, different signs carry different meanings, and that, importantly, these differences can lead to miscommunication, to negative group attitudes, and to conflict.  When I say “signs” I mean all kinds of things that carry meaning: phrases, words, word parts, sounds, and even gestures.  It’s easy to see how we can miscommunicate when we mean different things by the same word.  A rather innocuous example of this can be seen in differences between words for food between the United States and the United Kingdom (and these differences apply to other English-speaking countries as well).  A traveler from the US may be unaware of the differences in food-naming practices in the UK (or vice-versa) and might find that ordering certain foods will result in miscommunication.  For example, both countries have a word “chips”, but when US English speakers say this word they mean something like this: 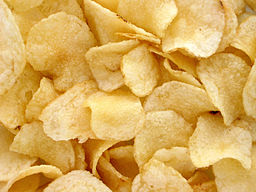 whereas UK English speakers probably mean something like this:

It’s easy to see where the intentions of the US English traveler might be interpreted differently by a UK English speaking restaurant worker (and vice-versa).  Such differences are now common knowledge, and even when they’re not, the source is rather quickly and easily recognizable.

I wanted to add to this my own story of miscommunication that involves not a speech sign but rather a gestured sign.  As you may know, I teach English as a second language classes.  When working with students from different countries, cultural differences are a salient aspect of the job, so I am well aware of the potential for our words to be interpreted in ways that we did not intend.

However, about a year ago I was teaching a writing class for bilingual undergraduate students at Georgia State.  The students were well acclimated to US culture and were highly successful users of English.  One day, I was circulating through the room as my students worked on a task in groups, which often involves many students vying for my attention.  On this particular day, a student from Ghana (in West Africa) tried to get my attention by snapping his fingers at me.  In my mind this sign is associated with calling a dog or a child or perhaps flagging down a restaurant worker.  It is not the type of sign that one uses to get the attention of a teacher.  I was offended.  I confronted the student about it asking him if he thought I was a dog.  He calmly explained that snapping is the way that students get the attention of the teacher in Ghana (and I have since met other West Africans who have done the same thing).  I was a bit ashamed of myself for not being more sensitive to this possibility.  However, I responded with a very English as a second language teacher tactic.  I told him that it was OK, but that he shouldn’t do it anymore because other professors will interpret his actions as rudeness.  His response was a lesson for me.  He said that rather than him having to walk around trying to avoid being “rude” to others we should all just give each other a break once in a while.  Perhaps we should all just be a little bit more tolerant of others.

Many people look at the situation like the one in Heathrow airport that John Gumperz documented or the incident in my classroom and see a clear need for cultural “outsiders” to obey the cultural expectations of the “insiders” (the dominant group).  However, while it’s undoubtedly practical for “outsiders” to gain information about “insider” culture, it’s also important for those of us who by birth are privileged with “insider” status to consider how we can be more tolerant of others.  After all, although a dominant group may possess most of the power, I think many of us would characterize our societies as pluralistic.  Living in a pluralistic society requires that we consider the possibility that differences do not imply deficits.  The lesson of John Gumperz then is this: the next time you think someone is “rude”, perhaps you should consider the possibility that they do not intend to be.  Then, rather than expecting them to conform to your ways of being, perhaps you should find a way to understand, live with, or even appreciate their different ways of being.