Home › Technology and language › Why the cynics are wrong (this time)

Why the cynics are wrong (this time)

I still have some things to say about our discourse on language learning and immigration, and I’ll get back to it soon.

However, I wanted to interrupt my regularly scheduled broadcast to say a few words about the recent discourse surrounding same-sex marriage.  With the Supreme Court hearing arguments about the issue today, there has been quite a lot of discussion of the issue.  My favorite part of all of this has been watching my facebook news feed become one long line of names next to pictures like this: 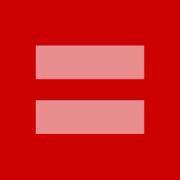 Of course, the cynics have chimed in in their usual fashion (I get why; I’m usually on their side).  One blog post even called the use of this symbol as a profile picture “useless”, because it will apparently change nothing.   However, in this case, what the cynics are usually accusing everyone else of, naïveté, they are themselves guilty of.

The argument seems to be that this small gesture of changing your facebook profile picture to the above image is not going to bring about significant political change (although it was apparently enough to inspire them all to comment on it).  Many people sporting their red and pink avatars have simply responded that they never intended to do so; it was “just” a show of solidarity.  I think we’re actually underestimating what has been accomplished with this little jpeg that could.

I spend much of my time thinking about how we do things with language.  For example, in this blog, I’ve look at how the media uses language to impart not only basic information about events but also how it can shape the way we think about those events through the choices it makes.  One of the most fundamental messages I’ve wanted to communicate has been this: discourse is powerful, and it matters a great deal.  This little equals sign, a very simple but potent piece of discourse, is doing much more than what the cynics wish to believe.  It is doing quite a bit: spreading information and power.

First of all, the potential reach that this little symbol is having is nothing short of impressive.  The internet traffic that reaches facebook on a daily basis is staggering.  Last year, facebook celebrated over 1 billion users, many of whom log on to the site every single day.  I have no idea how many people have changed their profile picture or how many people have seen this symbol, but I would guess it’s many millions.   Some of these people have asked themselves “what’s this all about?”  Some of those people even did a quick search on Google and got an article like this as their first result (which is what happened when I googled “red equals sign”).  If they clicked on the link and even if they only skimmed it, many of them learned more about what the Supreme Court of the United States was up to than they’ve known all year!  If you don’t believe in the influence that a symbol has on people’s behavior, then ask Nike why it will pay dearly to put its logo in front of the eyes of television watchers even if only for tenths of a second.

For me, however, the more poignant point is this: this symbol both reflects existing power and generates new power.  On the one hand, the symbol and its far-reaching spread reflect the numbers of people who are willing to take a brief moment out of their day to change their profile picture to support something they believe in, who are invested enough in this idea that they are willing to temporarily lend their cyber-identities.  On the other hand, this outpouring of support cannot help but have an effect.  It makes us stronger by serving as a reminder of the growing power behind the idea that same-sex couples should have the legal right to marry.  I am personally invigorated by the number of little red and pink symbols dotting my facebook news feed, each one of which says to me “you’re not alone in how you think about this” (look I even wrote a blog post about it).  Most importantly, by continuing to talk about and use symbols that remind us and others of same-sex marriage and homosexuality (and other issues tied up in this debate, for example, oppressive ideologies of gender), we contribute to a world in which homosexuality has a legitimate, public existence.  Through all of the small acts we make including our profile picture changes, we are changing the discourse of our world.

So here’s my point.  We have a tendency to dismiss discourse (symbols like the one above included) as unimportant.  We enshrine this idea in various phrases like “that’s just semantics” or “sticks and stones may break my bones, but words will never hurt me”.  We’re even more likely to do this if the language or symbols are on the internet, as if the fact that we spend hours using it every day has not been enough to convince us that the internet is (for better or worse) a significant part of our realities.  Cynics (like me) seem to naturally assume that the things people do are ultimately impotent.  However, even though this red and pink symbol is not going to climb out of your computer and write a majority opinion that overturns the institutional inequality inherent in our legal system, it’s still shaping our existences in some small way. It’s discourse.  It’s powerful, and it matters a great deal.

One comment on “Why the cynics are wrong (this time)”