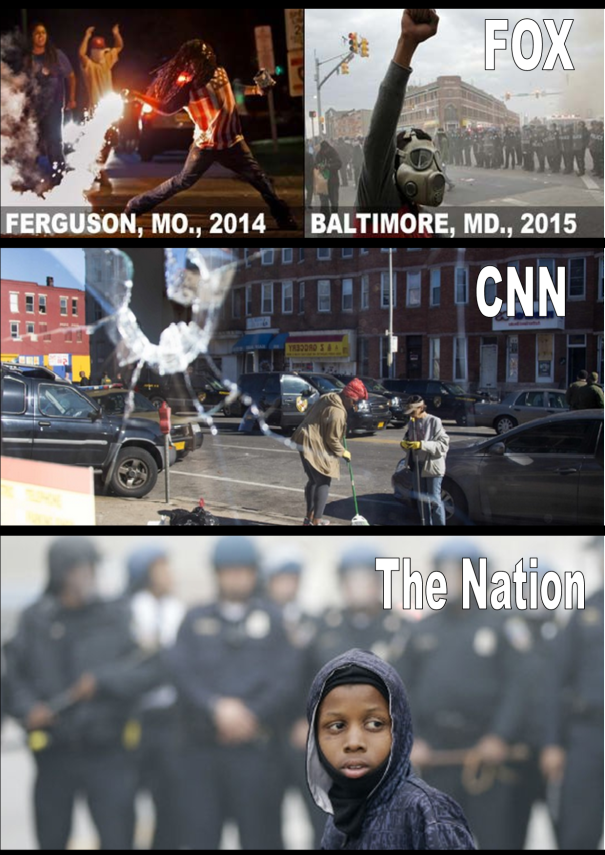 The death of Freddie Gray, a young Black man, while in police custody on April 19 sent residents of Baltimore, Maryland into the streets. Many have been actively calling for justice to be carried out, for the police officers responsible to be held accountable, and for wider reforms in the criminal justice system. On Monday, some turned to violence and property destruction, clashing with police, setting fires, and looting.

What are those of us who aren’t in Baltimore seeing and hearing from these events? The comparison above of three online media venues’ front page pictures from yesterday provides some indication of the different ways in which these events have been presented. FOX News presented a defiant protester from Baltimore next to scenes from Ferguson, MO (advertising a story claiming a link between the protests in both places). CNN presented a picture, through broken glass, of residents cleaning up after the rioting. The Nation presented a picture of a boy looking apprehensive in front of police in riot gear. Each of these pictures clearly presents the events and the actors in them very differently.

In addition to the pictures they choose to show us, I was interested in what type of language the media might use to tell us about about these events. Specifically, I decided to take a look at the words protest and riot (and their related forms, for example, protests, riots, protesters, rioters, protesting, and rioting).

There are a couple of ways differences in these labels might occur. In the video above, President Obama suggested that the media had not paid attention to the numerous peaceful protesters but only to the burning CVS pharmacy. In this way, it’s possible that use of one or the other word might simply erase the presence of the other. To talk only about rioting is to treat the protesting as not newsworthy.

In addition, it’s possible that some news venues might treat the same actions differently. It’s possible for people to look at the same scene and for one to see a purposeful protest and the other to see chaotic, senseless rioting. Our perceptions are also likely affected by who we see doing these things. The fact that many young Black men are in the streets may bias us toward assumptions that they are “up to no good”. Journalists are certainly not immune from viewing the social world through the lens of race.

With this in mind, I decided to compare the online coverage of a few different venues in terms of how they used these two words. 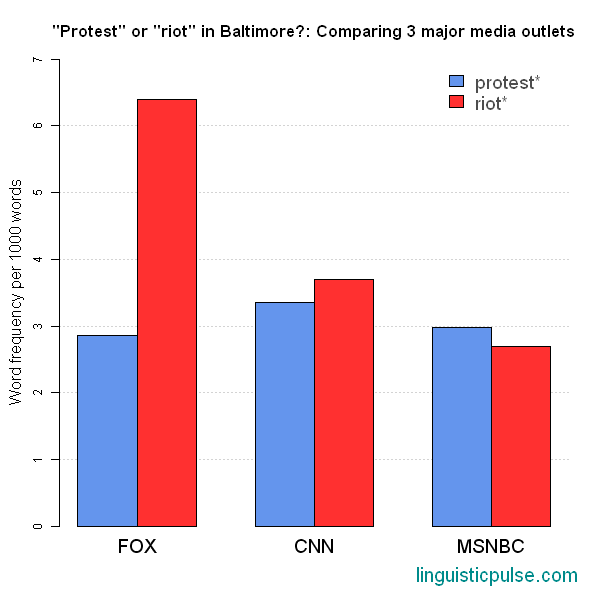 The plot shows tendencies that are what many might expect. FOX News presented us with news of riots far more than news of protests. CNN was nearly even with a slight edge to riots, while MSNBC gave a slight edge to protests.

Next, I compared a couple of newspapers, based in nearby Washington, DC. 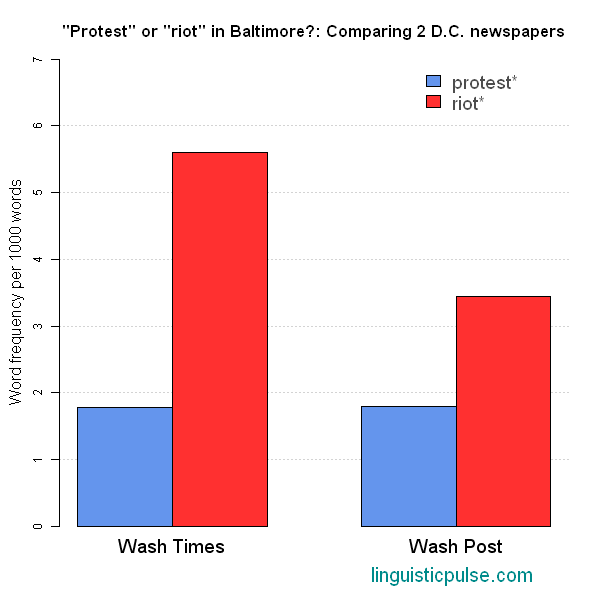 The Washington Times spoke overwhelmingly of riots, while the Washington Post mentioned protests at a similar rate but used riot and its related forms less frequently. 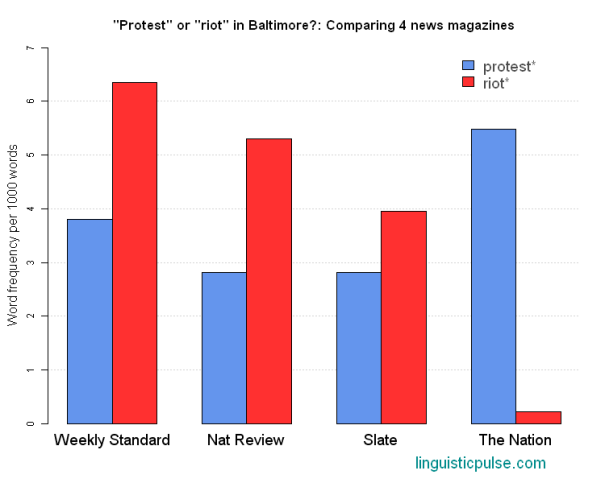 The Weekly Standard and the National Review used riot far more frequently than protest, which is not terribly surprising given other conservative venues did the same above (FOX News and the Washington Times). Slate‘s coverage was similar to the Washington Post and CNN. Most interesting is The Nation, where the writers seemed to have gone to great lengths not to use the word riot. In fact, their only use of word comes in describing the police as wearing riot gear.

I believe that the ratio of mentions of protest to that of riot tells us something meaningful about how these venues presented the events in Baltimore. In particular, it tells us that conservative venues have tended to erase the political messages and purposes of people in Baltimore and have instead presented the events there as involving needless perhaps inexplicable violence. More moderate and progressive venues have instead attempted to imbue many of the people in the streets with political purpose.

Some notes on method

I collected articles from within a 24 hour period from each of these venues on the afternoon of Tuesday, April 28 by searching for baltimore using bing.com’s news search (limiting the search by time and website). Thus, the articles in my data were from Monday and Tuesday. The number of articles varied by venue, and for some of the bigger venues like FOX News, I limited my searching to only specific parts of the site (for example, I did not include FOX Radio). In some cases (The Weekly Standard, The Nation, and Slate) there simply were very few articles. The table below presents number of articles, total words, as well as some statistics on my findings. 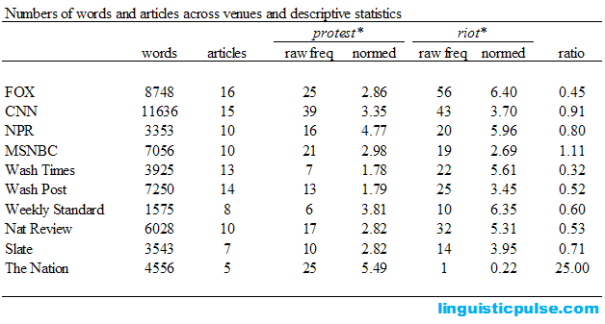 I computed word frequencies by searching for the base form of the two words, protest and riot, with a wild card asterisk placed at the end to allow for zero or more characters to be present on the end of the word. This allowed me to detect all different forms of each word.