Home › Language and gender › We call men abrasive. Except when it matters.

We call men abrasive. Except when it matters.

Over the past several months, I’ve been looking at the gendered way we portray leadership qualities. This has included looking at words like bossy and pushy which we assign with much greater frequency to women than men.

Today, I saw a new word pop up in the news, abrasive, thanks to Kieran Snyder’s report examining the different ways in which women and men in the tech industry were described in performance reviews. She found that women generally received more negative feedback from their reviewers. Among the differences was a greater frequency of words commenting on their personal, managerial, or conversational style such as bossy and another that Snyder found particularly interesting: abrasive (the title of her piece for Fortune is “The abrasiveness trap”). In her article, she reports that in the 248 reviews she examined, abrasive was used seventeen times to describe thirteen women but not a single time for a man.

This led me to wonder whether we would see the same general tendency in media discourse for abrasive that I have previously observed for pushy and bossy.

To examine this, I analyzed 350 randomly-selected occurrences of the word abrasive from the Corpus of Contemporary American English (only the Newspaper, Magazine, and Spoken sections; here’s my search). I threw out all instances where abrasive described not a single person but an object or a group. I was left with 124 instances of abrasive from newspapers, magazines, radio, and television. The gender distribution I found, however, was surprising. 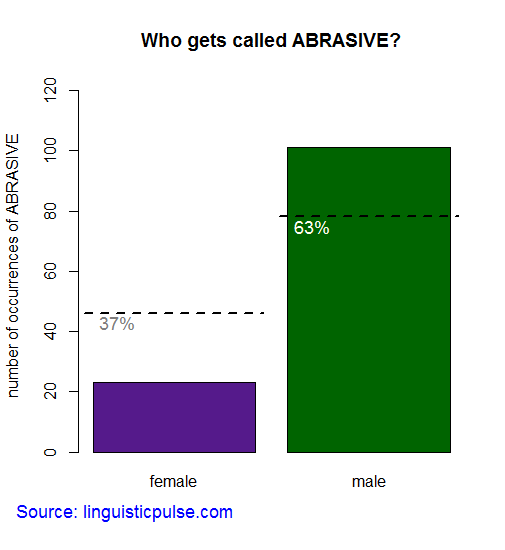 From past research I know that women are underrepresented in COCA and thus in public discourse generally; they account for about 37% of people mentioned in the corpus. As a result, I worked from a baseline of 37% women, 63% men. The results presented in the graph below show that men are labelled abrasive in media discourse with astounding frequency at a rate significantly higher (chi-square = 18.11, p < .0001)  than we would expect given that they make up about 63% of all people mentioned in the corpus. From these figures, I estimate that a man is about 2.58 times more likely to be called abrasive in public discourse than a woman (this figure accounts for the over-representation of men in my database; I have explained this math elsewhere).

What I think this shows is that men display traits that we consider and openly label abrasive in personality or communication style; indeed in public discourse we comment on men’s abrasiveness more than women’s. However, when we consider Snyder’s finding that men in her sample were not labelled abrasive in their performance reviews, this suggests that men’s abrasiveness is not necessarily framed as a problem. In fact, it appears that abrasiveness in men is often presented as a whimsical idiosyncrasy of otherwise competent, strong leaders and visionaries. This sort of usage is illustrated in the following examples from the data:

(1) That sort of information, though, doesn’t faze Grohman’s supporters, who acknowledge he can be abrasive, but insist he is the best thing that’s ever happened to Pearland.

(2) Serving in Washington and Vienna, he built a reputation as an effective, if sometimes abrasive, officer and a skilled interrogator.

(3) JAMES MCNEILL WHISTLER was as renowned for his radically spare, avant-garde exhibition designs and flamboyant, self-promotional personality as for his artwork. His abrasive and colorful personal style had a profound impact on European and American art.

(4) McNown can be prickly, abrasive and arrogant at times. He can be rude and dismissive. He can be annoying and aggravating. He can make you want to send him to his room without his dinner. He can make you want to smack him upside the head and yell, ” What’s your problem? ” Sounds like many an NFL quarterback, does it not? Sounds like a lot of successful NFL quarterbacks, come to think of it.

4 comments on “We call men abrasive. Except when it matters.”