For several weeks, I’ve been writing about the website Gizoogle, which ‘translates’ internet search results and webpages into language modeled after the hip-hop artist Snoop Dogg (see my first post for more details). Specifically, I’ve been looking into the question: Is Gizoogle an amusing tribute to one man, Snoop Dogg, or a racist caricature of African American English (AAE)? I’ve already written about the website designers’ intentions, the degree to which Gizoogle is an accurate representation of AAE, and how well it represents Snoop Dogg’s linguistic repertoire.

In this post, I want to take up another angle to this issue. Specifically, I’m interested in to what extent Gizoogle exaggerates the differences between Snoop Dogg’s speech (and/or AAE) and other forms of English, specifically spoken ‘standard’ English. My suspicion is that in rendering written web content in Snoop Dogg’s spoken language style (or in AAE), the website may create a false impression of how different Snoop Dogg’s speech is from non-AAE speakers’ speech, especially so-called ‘standard’ English speakers’ speech.

As a side note, I place ‘standard’ in scare quotes to accentuate the fact that (a) there is really no recognizable variety of English that this notion of ‘standard’ English refers to (this is particularly true when we’re talking about spoken language as US English is characterized by a great deal of variation) and that (b), even if there were such a homogeneous variety, labeling it ‘standard’ would arbitrarily elevate it over other varieties such as AAE.

Why would we care about Gizoogle’s  exaggeration, especially if the website is intended to be humorous? It’s important to recognize that humor often has a target. Are we laughing along with Snoop Dogg and AAE speakers when we laugh at Gizoogle or are we laughing at them? One way that we go about mocking others’ speech styles is to accentuate the differences between their language and our own. Often we may accentuate these differences without realizing the degree to which we also use the same features of language. In this way, we make language features that are actually common to all or most of us ‘the language of the other’, who is viewed as using these features due to some failure of character, for example, laziness or lack of quality education. It’s my contention that Gizoogle presents plenty of evidence of exaggeration in this way, specifically using features of spoken English that are not idiosyncratic to Snoop Dogg as a way of creating the impression of a greater divide between Snoop Dogg’s speech (or AAE) and ‘standard’ English.

Here’s what I found. The original story is 401 words long, and I counted 161 changes made by Gizoogle. I would estimate then that Gizoogle changed a startling 40% of this particular document. I broke these 161 changes into 4 different types:

1. Phonological changes – changes having to do with patterns in how Snoop Dogg pronounce words (for example, “after” is pronounced “afta”)

2. Lexical changes – changes having to do with Snoop Dogg’s use of vocabulary (slang, profanity, -izzle speak, etc.)

3. Morphosyntactic changes – changes having to do with Snoop Dogg’s use of ‘nonstandard’ grammar (for example, lack of -s on third person singular verbs as in “He go with me”)

4. Orthographic changes – changes that were purely about spelling. There was only one of these; it involved changing “s” to “z”. 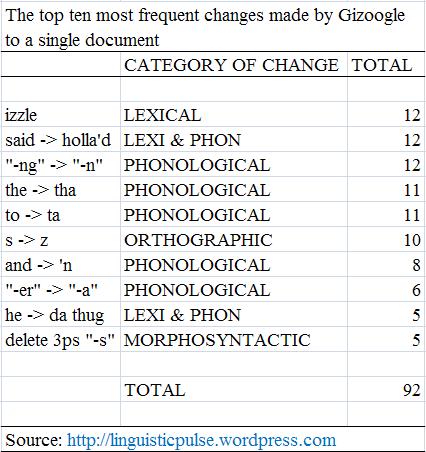 It would be hard to deny that one of the most frequent changes, the use of “izzle” (as in “Saturdizzle” for Saturday), is a feature of language reasonably unique to Snoop Dogg (and actually other African American artists before him).

However, many of the other changes are not unique to Snoop Dogg or even AAE. One of the most frequent involves eliminating “r” as in both the “holla’d” (hollered) change (which occurred 12 times) and the “-er” to “-a” change (which occurred 6 times). Gizoogle makes this change 18 times in this article. R-lessness (or the absence of certain r’s following vowels) is a feature of African American English, but it’s also a feature of many other accents of English (although the patterns are not identical) such as British accents, Australian accents, Boston accents, and New York accents.

Another common feature is the change from “-ing” to “-in” at the ends of words like “going”, which becomes “goin” in Gizoogle. This particular change is incredibly common to all spoken varieties of US English including so-called ‘standard’ US English. It involves pronouncing the “ng” sound (which is actually just one sound) with the tongue closer to the front of the mouth. If you monitor your own speech closely, you’ll probably find that you frequently produce this sound.

Another common change in Gizoogle appears to just be noting the fact that common function words like “the” and “to” are phonetically ‘reduced’ in speech. This is also a very common feature of all spoken varieties of English. Although they may make different changes, all varieties tend not to pronounce the citation forms of words like this when produced in a sentence (that is in the way they might pronounce the word “to” is different in a sentence from what it might be in isolation). Note for example that we rarely pronounce “the” in a way that makes it rhyme with “tree” (except maybe in the phrase “the end”). Also, note that the word “to” is often pronounced so that it rhymes with “duh” not with “Sue”.

At the beginning of this post, I suggested that Gizoogle may exaggerate the differences between Snoop Dogg’s speech (or AAE) and the written ‘standard’ English that the web content it manipulates is written in. My analysis of Gizoogle’s changes to one article suggests that many of the changes the website makes are not unique to Snoop Dogg or African American English (AAE). Indeed they are common features of spoken English, even for those people who identify as ‘standard’ English speakers. I believe there’s a good possibility that this is not obvious to many people who use Gizoogle (indeed the creators may not even be aware of it). I think it’s likely that many people view these differences as emblematic of Snoop Dogg’s unique speech style or worse the allegedly ‘lazy’ or ‘incorrect’ language of AAE. If this is correct, then Gizoogle is drawing on and may be helping to reinforce the misguided belief that AAE is ‘lazy’, ‘incorrect’ speech spoken by ‘uneducated’ people. If this is the case, then we’re hypocritically missing the degree to which the features of Gizoogle are features of all or many of our language varieties. Gizoogle isn’t necessarily to blame for our ignorance of language, but it certainly isn’t helping to educate people about their misconceptions of their own and others’ speech. I believe that the Gizoogle creators have included these features to accentuate the differences between written ‘standard’ English and Snoop Dogg’s speech or AAE and in doing so have actually exaggerated the ‘uniqueness’ of Snoop Dogg’s speech or AAE.

UPDATE (11 NOV 2013): I’ve posted part 5 of this series. In it, I look at the public response to Gizoogle and offer some final opinions on Gizoogle and racism.