Home › Technology and language › Google searches reveal stereotypes. Do they also challenge them?

Google searches reveal stereotypes. Do they also challenge them?

If you’ve ever started typing something into Google and been disgusted by the suggested results, you’re not alone. Take a look at this screenshot from a search I just did:

New research from Paul Baker and Amanda Potts at Lancaster University raises this issue. The researchers conclude accurately and dismally that “humans may have already shaped the internet in their image, having taught stereotypes to search engines”. Their evidence (which you can read about in a recent Daily Mail article here or from the journal Critical Discourse Studies here) makes this fairly undeniable. When someone starts typing a search for something like “why do black…” the suggested results will be something along the lines of:

All or most of these are oft-repeated racial stereotypes, although one has to ask how a question that starts “why do black people…” could end in anything other than an over-generalization. Nonetheless, although we’ve taught search engines our stereotypes as Baker and Potts point out, they are now also reinforcing and spreading them for us by reminding us of them and in some cases teaching them to us. Like any pervasive discourse, search engine suggestions infiltrate our daily lives in subtle ways, potentially socializing us into stereotypes just as we humans socialized our machines into those stereotypes.

However, I was curious about what I would find if, after receiving a suggestion like the ones above, I followed one of the links to find “the answer”. Thus, I searched for “why do black people have big lips?” (the top result above). Here are the top 3 results: 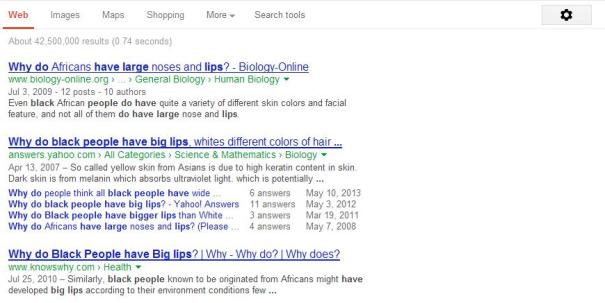 Not being a geneticist or a biologist, I can’t really comment on the accuracy of the information presented here. Certainly, what Google returns for me is not a group of scholarly sources.

However, I perused all three of them and found that far from espousing ideologies of racial superiority, the people posting on these websites appeared to be trying to take a sophisticated and scientific (if amateurish) approach to the question. Here’s a summary of what you’d see if you clicked on these three:

The first result will take you to a forum (biology online) where people interested in biology discuss issues that usually appeal to a general audience. The post that the first result directed me to was a student asking the community what they thought about his researched answer to a question posed in his introductory biology class. Interestingly, the writer begins “First off, it’s a generalization. Not all Africans have large noses and lips”. He then proceeds to describe aspects of the environment that might have contributed to evolutionary processes shaping the physical appearances of those of African descent in relation to European descent. Reading further, I find that the topic is picked up by others who help in shaping the original poster’s interpretation. The first response suggests that those of African descent do not necessarily have “big noses, but big nostrils”. Particularly interesting is further down where another writer critiques the assumptions of the original question. This writer asks why the title was not “why do non-Africans have small noses and lips?” and continues on to say that the original poster’s question implies that Africans “are the ones that are different, or are not the norm”.

Clicking on the second result, I come to a service provided by Yahoo! called Yahoo! Answers where people can ask questions of the community, receive answers, and select the best ones. The original poster asked a question about why particular features characteristic of different races would be genetically advantageous. Most of the answers, including the top rated one, attempt to explain these features through appeal to adaptation to the different environments that different races would have developed in.

Clicking on the third link took me to a website called KnowsWhy.com, which according to its About page is a website service that seeks to answer user-supplied “Why” questions. The website claims to “do the screening ourselves to make sure that you… get only the correct information”. Interestingly, looking over the home page it is clear that most of the questions people ask are stereotypes, for example “Why are Girls Emotional?” was the featured post of the day:

Although my sense was that the “Why are Girls Emotional?” page seemed quite full of stereotypes (and was likely written from a male perspective), the “Why do Black People have Big Lips?” page relied on explanations based in adaptation to environment similar to what the others did. I did notice one concerning aspect, however, and that was the comments section, where the first comment was clearly pseudo-scientific, white supremacist discourse:

So what happens when you do type in these searches? Well if you’re genuinely interested in the question enough to actually read some of the first results you find, my own experience here suggests that what you’ll be exposed to are sources that would not be considered credible in academic communities (and whose scholarly merits may be questionable) but nonetheless contain information designed to answer the question honestly using scientific theories (in this case evolutionary biology) and which often also acknowledge the over-generalization of the original question or the ideological norm that the question assumes (that is the question assumes Africans have “big” noses only because they are being implicitly compared to “normal” European noses). One other aspect here that is key is that the content is produced in a manner accessible to the lay person who might be asking such questions in the first place. Of course, it’s not all positive news, especially when one scrolls down to the comment section in the KnowsWhy.com post. There we find the same internet racism that I talked about in a previous post.

In the end then, I’m left thinking that we should be very holistic in interpreting Google’s autofill feature. While it clearly suggests we live in a world of stereotyping and particularly negative stereotyping in the case of historically oppressed groups, it may also indicate the potential for challenging these stereotypes. Perhaps some people ask these questions of Google because they are genuinely interested in the reasons, but they are embarrassed by the potential stigma of asking the questions in person (perhaps because race has become such a taboo topic). In addition, other people may not have the scientific literacy skills to pose their questions in ways that do not rely on social stereotypes. If they choose to read with an open mind, I suspect they’ll have their preconceptions challenged. What they will generally find are explanations for phenomena based in environmental factors rather than explanations based in racial superiority. Reading and researching in this way is also a clear method for them to begin developing the scientific literacy necessary to pose their questions in a way that doesn’t espouse hurtful stereotypes (such as implying that Africans’ noses are “not normal”).

For the future, perhaps people who generate content critical of racist, homophobic, or sexist ideologies should attempt to make that content searchable by popular questions like “Why do black people have big noses?” as well as accessible to broad audiences so that audiences relying on these stereotypes can have them challenged.

UPDATE: Amanda Potts has written about the media reception that her and Paul Baker’s research has received. Check it out here.